Njerpez is a foreign culture of Njerpezit whom are seen as notorious bandits by the more peaceful peoples of Unreal World. Sometimes known as 'those annoying men in red' or 'archery targets', their zone of influence is shown with purple colour on map mode and during world map creation. Their home region can be found in the far southeast of the world across a gulf separating their land from Reemi.

According to lore of the Unreal World, Njerpezit most frequently target the region of Kaumo in an attempt of conquering it for themselves; however, their camps can be found all over the Unreal World. They are usually found armed for war with iron weapons as well as ranged weapons, making them a large threat to new or unaware players. They can be encountered both as lone travelers or as groups of warriors.

The cultural items of Njerpezit are the Njerpeziläis Scimitar and the lamellar armour material, but they can often be encountered wielding and wearing great variety of non-cultural items as well. 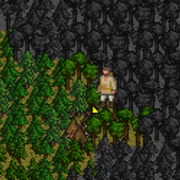 Unlike friendly cultures, Njerpezit are marauders who occasionally roam the territories of playable cultures and can create remote zones of influence away from their home territory by establishing camps. These camps are shown with a 'three tent' icon on the wilderness map, have their own zone of influence which will disappear when all warriors associated with the camp are killed, and may contain as many as a dozen warriors. The camp itself can contain valuable possessions and useful materials, and will remain in the world indefinitely after its occupants are vanquished.

Njerpez villages are sometimes fortified with fences and they may have their own saunas. Their villages are populated by craftsmen, maidens and housewives, in addition to Njerpez warriors. All NPCs in the area will attack on sight, even usually passive ones such as foreign traders.

If the player manages to kill all Njerpez of a village or camp the zone of influence will vanish. Note that some roaming Njerpez may be associated to a camp or village. If the player killed all Njerpez in a settlement and the area is still purple on the culture map, there should be one or more roaming or otherwise persisting Njerzpez still alive.

Lone Njerpezit will not immediately act aggressively. They may swear at the player as a warning to not get too close, or they may simply run away. Getting too close or attacking first will usually cause the Njerpezit to become aggressive.

Njerpezit found in their villages and camps and wandering as groups are likely to be immediately aggressive. They will alert their companions to the player's location. Groups of Njerpezit may also have their own dogs.

While they often prefer to fight to the point of exhaustion and even death, it is possible that a Njerpez warrior will flee during a fight even if he is winning decisively.

Lone Njerpez encountered within villages may also be neutral to both player and NPC alike.

Njerpez hunting is a popular sport activity among UnReal World players. If you are going on a Njerpez hunt you will want to be well equipped and possess competence in both hand to hand as well as ranged combat. Mobility is also very important factor, so simply wearing all the armour you can is typically not optimal.